Lyn makes headlines!
Keep up with her latest developments here! 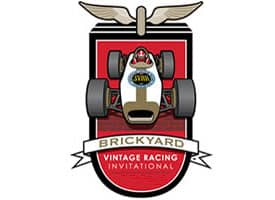 As was the case in 2014, Lyn, Willy T. Ribbs and Mark Dinsmore were the first three drivers to sign on to the ‘Indy Legends Charity Pro-Am’ event. Scheduled for Saturday, June 13, this year’s Pro-Am promises an even larger field than last year where 24 drivers took the green flag. For the 2015 running, as many as 33 former Indianapolis 500 drivers are set to compete on the Speedway’s 2.43-mile Grand Prix road course track.

As with the inaugural event, the cars for the Pro-­Am will be 1963 to 1972 vintage Corvettes, Camaros and Mustangs with an engine displacement limit of 355 cubic inches. The Indianapolis 500 veterans will be paired with amateur drivers in a 45-­minute timed race. The individual teams will determine how they split their time behind the wheel.

Lyn, who races occasionally in additional SVRA events and pulled double duty at last year’s Brickyard, is impressed with the growth of the series:

Tony Parella is really taking vintage racing to the next level. The professionalism in their paddock is outstanding and I believe in his vision of establishing vintage racing as a recognized motorsports alternative for fans and drivers.

Please take a moment to watch some highlights from last year’s Pro-Am event, where Al Unser Jr. and Peter Klutt were victorious:

The Pro-­Am cars and drivers will participate in a Fan Walk through on the starting grid prior to the opening ceremonies – which allows fans to see the cars up close, take photos and chat with the drivers. All entry fees will be donated to the Indianapolis Motor Speedway Hall of Fame Museum Foundation.

In addition to running the SVRA’s 11 groups, there will also be a Car Show on the golf course on the IMS grounds. Over 1,000 cars expected to participate in the activities. The 50th Anniversary of Jimmy Clark’s first Indy 500 win will be celebrated with a display in front of the Pagoda. And, the Unser Family Reunion is also planned, with Al Unser Sr., Al Unser Jr., Bobby Unser and Robby Unser in attendance. On Saturday evening, a Driver and Crew party will be held under the stars, with a live concert by Blood, Sweat & Tears and a spectacular fireworks. Admission to dinner is by race credential only; the concert and fabulous fireworks display are open to all at no charge.

Brickyard Invitational Ticket Information
Fans can order Brickyard Vintage Racing Invitational tickets for all or any one of the four days of the event through the Speedway website or by calling 800-822-INDY or 317-­492-6700 between 8 a.m.-­5 p.m. (ET) Monday through Friday. Fans can also visit the ticket office at the IMS Administration Building at 4790 West 16th Street between 8 a.m.-­‐5 p.m. (ET) Monday through Friday. Tickets for groups of 20 or more also are available. Contact the IMS Group Sales Department at (866) 221-­8775 for more information. Children 12 and under are admitted free each day when accompanied by an adult. Tent camping passes in the IMS infield start at $30 and are available all four days as well.

About  SVRA
The Sportscar Vintage Racing Association is the premier vintage racing organization in the United States. Founded in 1981 by Ford Heacock III the SVRA has 2,000 members. It currently sanctions 18 events at some of the finest racing venues in the United States, including: the Indianapolis Motor Speedway, Sebring, Road America, Watkins Glen, Auto Club Speedway, Road Atlanta, Pocono Raceway, the Mid-­Ohio Sports Car Course, Sonoma Raceway, Portland International Raceway and Virginia International Raceway. The rapidly growing organization hosted the first U.S. Vintage Racing National Championships at the Circuit of the Americas in Austin, Texas in 2013.

Further information on SVRA, a complete schedule for the weekend and an entry list can be found on the SVRA website.

The series is attracting a steady stream of top racers, engineers, mechanics, advertising agency executives and journalists. And with the high-profile lecturers, attendance has grown. As part of the museum’s spring roster, Lyn’s April 25 guest spot follows the March 7 appearance of former Formula One competitor Howden Ganley.  Recently the San Jose Mercury News published a story detailing the pair of appearances.

An audience favorite is a portion of the lecture where each guest is asked then same six questions, including which car they would most like to drive coast to coast  – on either a luxury ride or madcap dash. When asked about her message, Lyn says she will bring a life lesson she learned on the track:

I’m blessed to have found the things I love to do in this world. There’s more inside us than we’re aware of. If you haven’t found fulfillment, keep going. With that, you can be empowered.

The lecture is slated for 10:30 AM – NOON on Saturday, April 25. Admission is free for museum members; or included with $15 museum admission. For more information or additional details, please contact the museum directly at 925-736-2280.

New York City based weblog Jalopnik recently released their list of the ‘Ten Most Successful Female Race Car Drivers Ever’ – and Lyn is ranked third!

I have to say I was really shocked and honored to be so high on the list. Some awesome company!

The list includes drivers and industry pioneers – from around the world and from the last century – whose successes who helped pave the way in the male-dominated world of motorsports for today’s contingent of talented female racers. 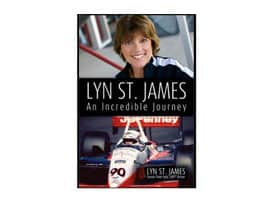 This is one of those books that creates an incredible journey for the reader. You’re strapped in behind the wheel with Lyn St. James, feeling every turn with the same excitement and tear jerking moments she felt throughout her remarkable career.

More than an autobiography by a legendary race car driver, St. James captures the essence of racing in both an educational and inspirational way. I only wish someone had handed me this book when I first became interested in motorsports.

St. James walks the reader behind the scenes of what it takes to become a race car driver, from chasing sponsorship dollars to getting back on the track after a crash … and everything in between. It’s an eye opener and she did it all with grace and determination. Lyn’s sense of humor and down to earth style comes through in her writing. She shares experiences in detail, often down to the second, and then translates them into positive messages on life. Many of these messages are summarized at the end of chapters as ‘Pit Stops’. This is just as much a motivational book as it is a story of Lyn St. James’ life.

For all of us who have gotten hooked on racing just by being at the track, we know how the sounds, the smells, and the speed of the cars are electrifying. This is how it all started for Lyn. At age seventeen, sitting in the stands watching her first Indy race in 1966, she was captivated by the drama and fell ‘in love’ with Indy racing. Little did she know that her life would stay focused on the Indianapolis 500 for the next two decades.

During an era when there were few female race car drivers, it was Lyn St. James herself who wanted to achieve on her own merits without special treatment. The stories she shares, from on and off the track, point to her deliberate care in making sure she was true to herself and to her chosen career. Although this book is appealing to both genders, Lyn speaks to her philosophy on supporting women across the board in all professions and especially those young women interested in pursuing a career in race car driving. The results of her own career goals have given her respect as both a driver and motivational speaker.

The content of this book is divided into fifteen chapters with an Afterward titled The Future, describing Lyn’s inspiration to establish the Lyn St. James Foundation in 1993, renamed in 2002 to the Women in the Winner’s Circle Foundation. Once you pick up this book, I guarantee you won’t put it down. It’s a quick paced book. I would like to see it on required high school reading lists. Not only a historical autobiography of a famous female athlete, it also serves as a motivational book laying out guidelines and scenarios on life lessons very applicable to teenagers. The adult audience readership is not limited to race fans. It’s truly a book for everyone.

It was hard to decide which chapters of this book I enjoyed most. If I had to choose, I would say Chapter One, titled, Drive the Course You’re Given, a glimpse into St. James first time racing. Also inspiring was Chapter Thirteen, The Glory of Teamwork.

Lyn St. James was not someone who set out on a deliberate path to become a race car driver. The same year she got hooked on the excitement at Indy, Lyn entered a race on a dare. It’s amazing to read how a rather shy girl from Ohio ended up first racing on a drag strip. It would be another eight years, before she had a chance to feel that passion again … and it ended up to be one of those humbling life lessons which is humorous to read, but probably not to live as her 1973 Ford Pinto spun into the murky wetlands off the Palm Beach International Raceway.

Lyn drove seven Indianapolis 500 races. Much of the book focuses on her initial quest for sponsorships and a team owner to take her on as a driver. Lyn’s last Indianapolis 500 race in 2000 covers several chapters focusing on her devastating crash during qualifying. In Chapter 13, she compares the remarkable ‘team effort’ to recover and qualify to run that race to her 1985 win at Watkins Glen in the Serengeti 500, where she chose to drive on her terms without the team, learning a hard, yet valuable, lesson on the importance of teamwork.

To read this book, is to feel like you know this unique woman. Her positive attitude towards life is contagious.

An Incredible Journey is available for purchase here on Lyn’s website.